Llyn Anafon reservoir is located in Snowdonia National Park at an altitude of approximately 500m on the Carneddau Mountain range.

A dam was built across the lake in 1931 to enable water to be supplied to Abergwyngregyn, Llanfairfechan and the surrounding area.

But since 2002, this is no longer the case. The dam is also at a point where it would need significant investment to meet modern day dam safety standards. As a result, we are carrying out work to return the reservoir back to a natural lake.

Once we complete our work, the lake will be returned to its natural state before it was made into a reservoir in the 1930s. The scheme has been evaluated independently, and it will continue to support habitats and species of ecological importance and remain a key ecological and cultural feature in the area. Independent monitoring will continue during and after the work is carried out.

What we are doing on site

Permission has been granted by Natural Resources Wales (NRW), and work has started to restore Llyn Anafon to its former state– putting it back to its natural water level which is 1.4m lower than it is now.

The tower now acts as an overflow for the reservoir and has a series of stop logs which will allow the water level to be gradually lowered to the natural lake level (approximately 30cm at a time).

This work will be done over a period of five to ten years, so that we preserve the local wildlife and the aquatic plants in Llyn Anafon.

The water level at Llyn Anafon will be lowered gradually.

Following discussions with the local community, the National Trust has given us permission to erect temporary fencing around half the reservoir. This is to prevent livestock, the Carneddau Ponies and the general public from accessing the land that will be open to the elements once the water levels recede.

The temporary fencing will be installed in late spring 2022. Once in place, a further drawdown will be made lowering the water level by around another 30cm.

The fencing will be removed once the area has dried and will be erected again prior to the next drawdowns. 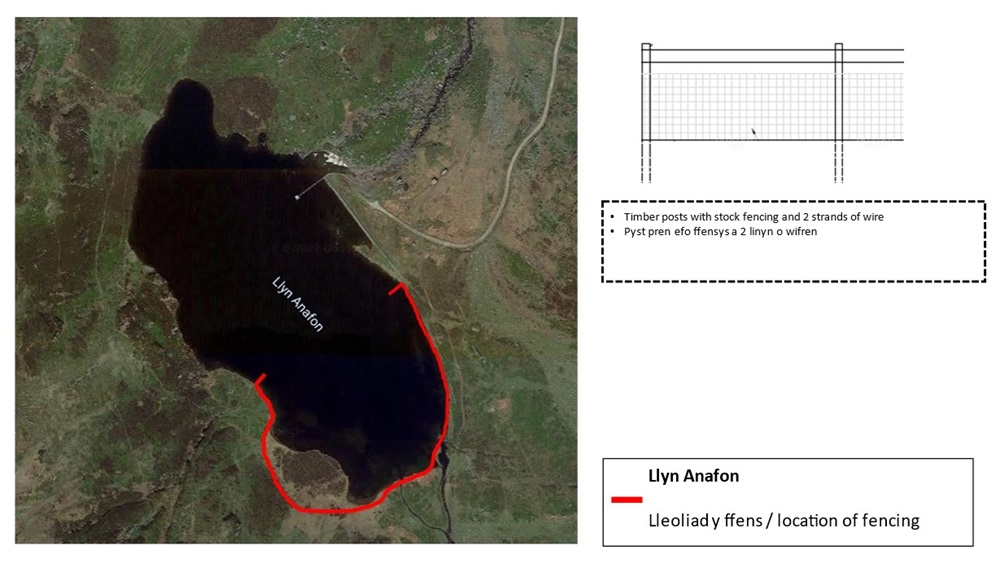 After the water in the lake has reached the required level, part of the dam will be lowered to the original stream bed height and a new weir created to allow water from the lake to flow to the stream.

This work has been authorised by NRW who also play a role in monitoring any impacts. Six monthly meetings are held with NRW to review the Water Quality data samples collected monthly. We also report back on the macrophyte plants and take monthly fixed-point photographs to show how the shallow water macrophyte is adapting to the reduced levels.

Ecological mitigation plans are in place should they be needed and a small population of the rare plants in Llyn Anafon have also been translocated to the National Botanical Gardens in Carmarthenshire, where they are thriving. As compensatory measures for bringing down the water levels at Llyn Anafon, some of the rare aquatic plants will be moved to Llyn Bran.

There will still be a lake at Anafon after the work is completed, and 60% of the surface area will remain. It is a process of re-naturalising the area to how it looked before being made into a reservoir. Also, by connecting the lake with the downstream watercourse, other trout populations will be able to reach the lake and increase the genetic diversity.

Further improvements will also be made to the track leading to Llyn Anafon.