There are many other areas throughout Wales that will benefit from a Rainscape project. You can find out about other projects below.

This RainScape project centred on the Castle Lea estate near the Neddern river in Caldicot, where highway and sewer flooding problems had become apparent due to an overloaded sewer system. Initial proposals looked at a pumping station to remove surface water from the estate into the river, but this was viewed as being environmentally unfriendly, and too costly at £2.1 million.

Instead we looked to implement a more sustainable system which uses flood storage to resolve the problem.

The RainScape project included providing a new surface water sewer to remove excess water from the roads in the estate. When there is heavy rainfall, or when the River is tidelocked, the flow of water is now diverted to a relief point in the system rather than into the brook. It is then discharged into a playing field, where water then either infiltrates into the field or returns through the network into the river once the levels have fallen.

In total this project cost £1.25 million, generating a saving of £850,000 compared to a more traditional solution. It has also ensured that the 10 properties that were identified on our flooding register are no longer at risk of flooding.

This RainScape project centred on Trelawney Avenue in Rumney, Cardiff where flooding occurred on the highway and to the outside of two properties during periods of heavy rain.

The aim of the project was to lay a surface water drain which intercepts surface water from the roads going into the network and redirects it into an existing surface water network in a nearby street. In addition to that a wall was built to protect properties from the potential effects from surface water run-off.

As a final measure to protect the properties, we disconnected 75 properties upstream of Trelawney Avenue by donating water butts to residents and re-directing the roofs’ downpipes into water butts.

In September 2013, Welsh Water’s invested £10.4m in creating a state of the art water testing laboratory in Newport.

The development showcases a RainScape project, which redirects rainwater from the 25,000sq ft roof into a series of planters designed to clean the water before discharging it into an open pond. This helps reduce the volume of surface water generated by the site.

The Glaslyn laboratory also boasts the very highest environmental credentials with an array of solar panels on the roof of the building to generate electricity for the site and help reduce its carbon footprint.

The building received the Gold Award in the AIS Contractors Awards for the high levels of craftsmanship and design and the delivery of ‘outstanding projects of exceptional quality and value’. 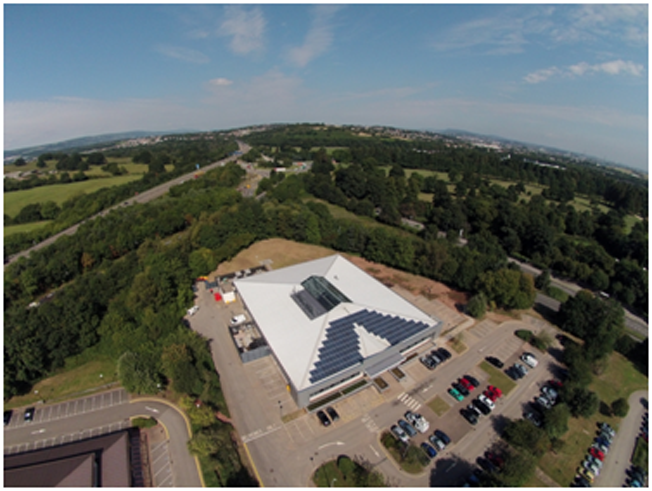